A volcanic dyke in the Masca valley on Tenerife

The top of Teide volcano in snow on Tenerife

The endemic flowers at El Hierro

The Tower of Frontera/El Hierro

The symbol of El Hierro

The Teneguia volcano on La Palma

The smallest hotel on El Hierro

Flight over Teide volcano to El Hierro island
The Canary islands form a fascinating and very diverse volcanic archipelago in the Atlantic Ocean. Famous for their mild weather year round, the hospitable islands not only offer spectacular scenery, delicious cuisine, friendly people and an interesting culture deeply involved in Europe's time of early trans-Atlantic discoveries, but also a myriad of geologic highlights to discover: historic young lava flows, cones and craters, lava tubes, calderas, impressive dikes, and a multitude of different deposits.
This tour visits the 4 most volcanically interesting islands - each with her own character: Lanzarote, La Palma, El Hierro, and Tenerife. Aimed towards people who have an interest in geology, nature, culture, photography and walking, the tour will be guided by the French geologist Eveline PRADAL with research background on the islands.
Day 1: Arrival to Tenerife
Arrival at Tenerife North airport. Own transfer to the hotel in La Laguna. Meeting with the group in the evening for welcome dinner.

Day 3: Teide caldera
The visit of the caldera Teide. In the morning we take a cable car to Teide to discover this wonderful place. In the afternoon we have 3h hiking tour around Roques de Garcia (path n°3).

Day 6: Scenic tour to the Malpaso highest tops
Hiking tour to visit of the highest tops of El Hierro and the Tanganasoga volcano.

The tour starts at the Tenerife North airport and ends in Arrecife of Lanzarote island.

Dr. Evelyne Pradal is a trained geologist and volcanologist with a passion of showing and teaching her subject to the general public. Born in Cantal, in the heart of the Auvergne French volcanic field, she studied in the renowned Center of Earth Sciences of the university of Clermont-Ferrand, one of France's leading research institutes in the field of volcanology.
Her research and trips led her to study volcanoes in Mexico, the Caribbean, East African Rift and other areas.
After completing her doctorate degree in 1990 she went on to work as consultant and teacher in earth sciences, and she has been organizing expeditions and study trips to volcanoes in Italy, France, the Caribbean, Ethiopia and Tanzania, Djibouti, Canaries islands, New Hebrides trench, Indonesia, ... designed to share knowledge and the fascination of her subject, the beauty of our living earth, to the general public. She is also (co-)authored the books: "Tout savoir sur les volcans" (2018, Ed. Fleurus jeunesse) ("A la découverte des volcans extrêmes" (2013, Vuivert De Boeck Ed) "Au coeur des volcans" (2004, Ed. Fleurus - Geo Ados). Evelyne with her charming smile joined our team in 2010 and guides trips to Ethiopia, the Caribbean, Canaries islands, Italy and new study trips such on Auvergne volcanoes, her homeland, and Tanzanian Rift Valley. 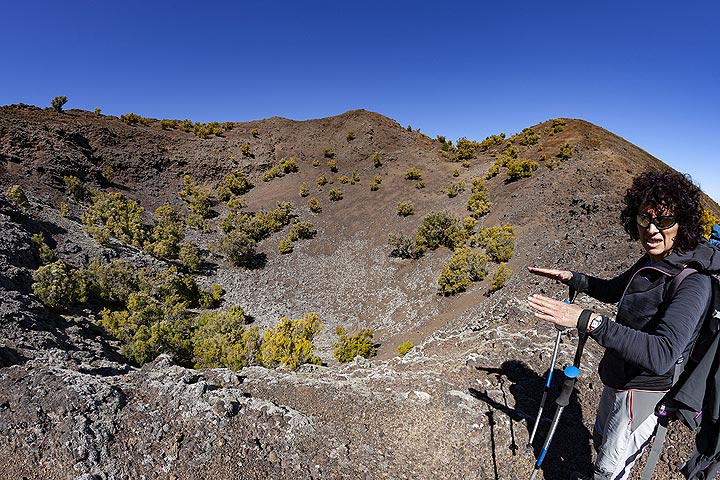 Evelyne Pradal at the Tanganasoga crater on El Hierro (Feb 2019)

Arrival at Tenerife North airport. Own transfer to the hotel in La Laguna. Meeting with the group in the evening for welcome dinner.

After breakfast we start a spectacular drive along La Esperanza ridge road to discover the island and its geological features. This road not only boasts numerous miradores offering downward views of the northern and eastern coasts, but also starting point for lovely walking excursions through the Esperanza forest.
We make a stop to visit El Portillo Visitor center. This is the place to go if you are interested in the geological history and connective aspects of Mount Teide and it’s volcanic origins. There one finds information charts, photographs and a film on this fascinating subject. The building itself is very sympathetic to the surroundings and seems almost submerged into the rock. Certainly it is worth to wander through the curated botanical gardens showing the plants endemic of the area.
In the evening we arrive to where we stay next nights

The VolcanoDiscovery group hiking in the caldera of Teide volcano.

A hornito and its small lava flow in the caldera of Teide volcano. Tenerife island.
In the morning we take a cable car to Teide to discover this wonderful place. In the afternoon we have a 3h hiking tour around Roques de Garcia (path n°3). On the hike you see the Roques de García with the famous Roque Cinchado, also known as Finger of God. And while you are circling the small mountain massif, you have fantastic views of the Teide, the Pico Viejo and all the mountains surrounding the Caldera. The wide plain of the Llano de Ucanca is at your feet.

Today we visit El Teno old volcanic massif - one of the island's most beautiful natural areas that has preserved most of its ecological, scenic and cultural wealth, largely thanks to its isolated position. You will have panoramic views of magnificent cliffs, valleys and laurel forests and pass through quaint villages with wonderful pieces of traditional architecture.

Today we fly to Valverde/El Hierro. Close to Valverde, visit (free) of hydro / wind turbins huge project; On the way to Frontera where we have our accomodation, we stop at Mirador de la Pena (El Golfo landslide) to visit Ecomueum Guinea or Lagartorio with endemic lizards.

A spindel bomb in the forest of Malpaso
This hiking tour will bring us to the Malpaso top. Inside the clouds there will be views towards the El Golfo area and to Frontera. The target of this tour will be a view to the Tanganasoga volcano. This is a volcano that may erupt in future. There are many earthquakes around him in the last years...

La Restinga got famous by its submarin eruption in 2011-2012 and the geysir. Now the activity is over, but many earthquakes show that there is still activity in the underground. Volcanic eruptions are possible in future.

Today we hike in Barranco de las Angustias.
If we have enough time we can go to the Visitor Center close to Los Llanos.
At the end od the day we have a walk in Los llanos de Aridane nice historic downtown.

Day 10: Hiking into the caldera Tamburiente

On this tour we will hike into the centre of the caldera Tamburiente. We will cross a small river and discover the oldest rocks of La Palma. There are very nice samples of pillow lavas and we will discover minerals. If we are lucky, we will find rare orchids and watch lizards.

The volcano of St. Antonio

Today we fly to Lanzarote. After arrival we discover the natural beauty and geological marvels of northern Lanzarot: Jameo del Agua, a cave formed by the volcanic eruptions of the “Volcán de la Corona” and that was designed by the famous architect César Manrique in 1966. Now it is introduced into the sea, has a saltwater lagoon where we can discover a unique specie, the endemic crab-the albino crab, known as Jameito. Then we visit Mirador del Rio, a glass-walled bar and restaurant carved into a mountain 1,600 feet above the Rio Strait. From here you admire La Graciosa island, and the Chinijo Archipelago from a spectacular perspective.

Day 13: Hiking through the lava fields to the Caldera Blanca

View towards the Caldera Blanca
After a good breakfast we will drive to the starting point of our hike towards the volcanoes of Caldera Blanca. We will wander through a landscape of lava flows. At one point we may see an old lava cave before we get to the central craters. If we are lucky, we can discover the typical atlantic lizards and geckos. In the rocks we will find lots of green olivine crystals. A farewell dinner in the evening.

Day 14: Departure or own extension

Departure or own extension.
to top
Show in other currencies
[close]

Prices for tours at custom dates: on request

You will need a normal to good physical condition and should be used to go hiking on easy to moderate unpaved trails, lengths of up to approx. 10 km distance and climbing up to 7-800 m in total.

The tour starts at the Tenerife North airport and ends in Arrecife of Lanzarote island.

Canary Islands: tour photos Feb 2019 (164 Images)
Copyrights: VolcanoDiscovery / VolcanoAdventures or sources as noted.
Use of material: Text and images on this webpage are copyrighted. Further reproduction and use without authorization is not consented. If you need licensing rights for photographs, for example for publications and commercial use, please contact us.

Eager to learn about volcanoes and the fascinating world around them? Visit VolcanoDiscovery
Get our newsletter!